Japan – two words: simply wonderful. I fell in love with the people, the food and the culture. It was a short trip – just a week – but it was a good mix of sightseeing, shopping, and of course performing with The Glad Stones.

Tokyo
Spent three days in Tokyo with Carol and her colleagues who were there on a company trip. We were fortunate to be put up at the luxurious Hilton Shinjuku for most of our stay. I enjoyed just soaking it all in, walking around the streets at night with the temperature below 10 degrees: 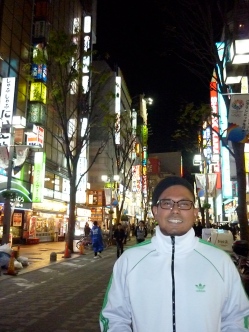 It’s colder than it looks.

We also had time to squeeze in short trips to the Harajuku fashion district and the famed pedestrian crossing at Shibuya. Carol took this shot of Shibuya from the Starbucks outlet there: 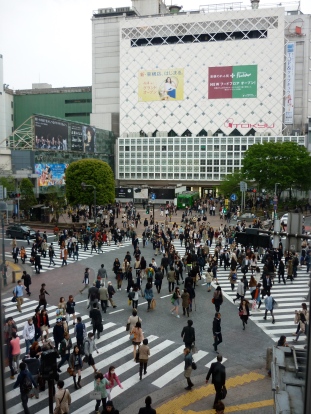 View from the Starbucks – Shi-booya!

One of the highlights of Tokyo was an amazing dinner the bunch of us had at an upscale Japanese restaurant. We sampled everything from sea urchin to tuna belly sushi. It was the first time I actually enjoyed sake (Japanese rice wine), it was warm and fuzzy and the cold made it taste heavenly.

Sushi with a dual topping of Sea urchin – the yellowish stuff on the right – and salmon roe (the orange balls).

Kobe
We travelled to Kobe via the Shinkansen (bullet train), a journey of about three hours. Shinkansen tickets are pricey (about 14,000 yen, or S$180, one way), but thanks to the Japan Rail Pass (available only for tourists), we had an unlimited number of rides on the high-speed train – and other trains run by the Japan Rail company – for 7 days, all for about S$360 per person! It was a sweet deal.

From the Shinkansen, we changed to a local line bound for Sannomiya, the biggest downtown area in Kobe, where two of our live gigs would be. This is me on the regular train, acting emo:

On the road again…

In Kobe, our hotel of choice was the B Kobe. I was glad that we picked it, despite having to lug our suitcases and my guitar up god knows how many steps at the station. It turned out to be an extremely central location in the heart of Sannomiya. The room was bigger than the ones you usually get in Tokyo.

Like the true food connoisseurs we are, and having heard so much about Kobe beef, we decided we just had to try it the moment we arrived 🙂 Just across from our hotel was a decent looking restaurant, and it was open even after 10pm. So we popped in and got a set for about S$80 each. Here’s Carol’s medium steak:

Kobe beef: Succulent and tender, and the meat seemed to melt in your mouth. Worth the price.

We spent the rest of our first evening in Kobe just walking around Sannomiya, which had a multitude of bars, shops, eateries, and interesting architecture such as this:

The next day would be TGS’ first gig at a live music house called Varit. It’s a good-sized venue, with a large, spacious stage and two dressing rooms backstage.

How live music houses usually work in Japan is that bands pay to perform. Yes, they pay the venue in order to have a slot. It’s a strange practice that I don’t entirely agree with, but that’s how it is there. What I gathered about Varit was that bands from Kobe have to pay a certain amount, but bands from out-of-town don’t. Generally, foreign acts are exempt from this.

We arrived at the place at around 4pm for the sound check, then returned in the evening for our 30-minute set. It was nice to see this at the entrance:

The somewhat-dynamic duo. Lights always add a touch of grandeur.

Varit is well-run, and boasts professional gear and lighting. It was certainly a pleasure performing there. There were three acts that night, a solo singer-songwriter and a young funk band played first, and when it was our turn a modest crowd had gathered.

You might wonder how it feels to sing to a non English-speaking audience, and I must say, apart from Jaye having to (with great effort) translate everything I said in between songs into Japanese, I noticed that people were grooving and getting into our music, proof that music does indeed transcend boundaries and languages.

We hit Andy’s Imagine the following night. It’s a cosy bar owned by a nice British man named (you guessed it) Andy. He’s been running the place for nearly 13 years, imagine that! The bar is located in the Rokkomichi area of Kobe, a place with high-rise apartments that look just like the HDB flats of Singapore!

Anyway, at Andy’s, everyone knows everyone, and it’s a great place for intimate performances. It’s got a corner that’s been carved out as a stage and we played two sets there. Andy himself got into the action by urging his customers to buy our album (he got one himself :)). After the gig we spent the rest of the evening mingling with the people.

Sometime before leaving Kobe, Carol and I managed to see the last of the famed sakura (cherry blossom) at a shrine near our hotel. It was lovely. We were lucky because we arrived just after the end of the season but there were a few trees still in bloom. And we did the touristy thing by snapping pictures and buying some good luck charms from a souvenir store there. 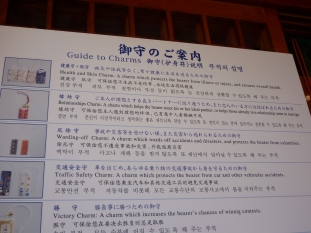 Osaka
Osaka is a 40-minute train ride from Kobe. Our plan for the last day of our tour was to busk at the Osaka train station, which is about as crowded as Tokyo’s Shinjuku, and a very popular spot for “street music”, as it is known there.

But before leaving for Osaka, I had to get a portable battery-powered amp for the performance. The good thing about Japan is that music stores are large and well-stocked. I found a decent Roland at the Ishibashi store in Kobe. That’s me trying out the guitar and mic functions. Cost: about S$200.

Armed with gear, Carol and I boarded the train and arrived in Osaka in the afternoon. We spent some time walking around Shinsaibashi, a popular shopping street, and she went crazy at the Sanrio store.

Busking night, and there were performers literally at every corner outside Osaka station. So we decided our first spot would be on a link bridge above the bustling traffic. It was freezing out there in the open, but we gave it our all. At the end of our set, Jaye’s friend Marina – who’s a trained opera singer – jammed with us. The moment when acoustic folk music met classical opera, was awesome.

The second spot we picked was at a large pedestrian crossing at one of the station entrances. It was a strategic location because we could get the attention of the crowds waiting to cross the street. 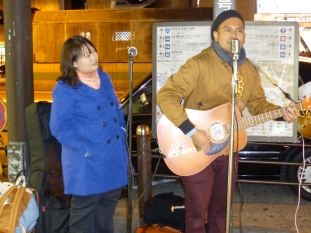 The night ended with both Jaye and I playing our solo creations. I did a few songs with Carol harmonising with me.

To all the good folks who bought our CD as we busked on the streets of Osaka, a big thank you! To the fellow-musician who came up to us as we played and got our CD, keep the tunes alive mate. It was a fantastic feeling connecting with an audience from a different country, and seeing them enjoying our music.

I respect musicians in Japan. They take their art very seriously – even on the streets. They give their all, as if they were holding a performance for a 50,000 strong crowd. We saw so many bands, all dressed up and with their gear, taking a long train ride somewhere just to perform. Watching them inspired me to work even harder.

Thank you, Japan. I have a feeling I’ll see you soon.

What’s next for TGS? We’ll reunite in June for some shows in Singapore, so stay tuned!

That’s right, I’m heading to the Land of the Rising Sun with Carol tomorrow for a week! It’s our first time there and I’m sooo looking forward to it. Will spend a few days in Tokyo before taking a bullet train to Kobe, where Jaye is based. There, we have shows lined up at three of Japan’s quintessential live music houses. Here’s what the schedule looks like right now:

Gonna attempt to update this blog while I’m there, or I’ll just post random stuff on TGS’ Facebook page. Oh, and if you missed our recent Starbucks Singapore tour, you can catch up on on what happened on our Facebook page as well.

Oh, and here’s a recent shot of us, courtesy of Ivan Joshua Loh of Pigs Can Fly photography:

Watching the tragedy unfold in Japan the past week, we felt compelled to write this song.

“Love Over Love” is all about celebrating the spirit of giving, spreading the love, and paying it forward. It’s about love and goodness building up with each good deed, again and again, until the world becomes a better place.

Our hope is that it will inspire you to do something to help the ones who need it most.

For this song, we collaborated with the extremely talented rapper, BBS, from Jaye’s hip-hop duo New Fro Matter. (Btw, he wrote the rap in about 10 minutes, just before we recorded the video!)

Your heart’s down, but you’ve got friends around you, let the love
surround you
You’re lost we’ve found you, got your back
Gonna get you off the ground

Don’t cry, but if you do you can dry your tears on my sleeve
I won’t leave you hanging, don’t you fear my friend
In the end, love grows over and over

The world’s too small to ignore all the people left behind,
Open the door, let your neighbour in, not them but friends
For us for all

More than the thought that counts, it’s what you give, a chain reaction
A spark of passion, start a flame, small actions
Go round again and again